Contrary to what some people may think (yes, Tom B., I am looking straight at you!), writing this travel blog is not my principal activity when I am overseas. Blogging is strictly a spare-time endeavour. Seeing the sights I want to see, experiencing the experiences I want to experience, riding the trains I want to ride, socialising with people I meet on my way, all take precedence over writing this dumb blog.

My aim is to write one blog entry a day, preferably as soon as possible while my memories and emotions are still freshly impressed on my brain. Typically I write a blog entry before going to bed, or immediately after getting up in the morning. That being said, keeping to this schedule is sometimes easier or harder to do, depending on the destination. For instance, in Sri Lanka, a country with little notable nightlife except in the beach resorts, it was extremely easy to do. Same for when I was on my road trip around Iceland. It is easy to write thousands of words when you are in some little fishing village where the supermarkets and even the restaurants shut at six in the evening. There is literally nothing else to do.

Budapest, however, is neither Sri Lanka or Iceland. What an amazing, lively, interesting city. I was there for five nights and I only scratched the surface of Budapest. There was still so much that I did not see and not for want of trying.

Though I am now four nights behind on my blogging schedule, I still do intend to write one entry per day of travel. My memories and observations and impressions will not be as fresh; I will need to go through my Facebook timeline and my iPhone's camera roll to remind myself of what I actually did a mere four days ago. It has all been a bit of a whirlwind and the days of the past week have blurred into one another in my brain.

It is an important date in these parts. October 23 is National Day, also known as Szabadság Napja: "Day of Freedom". This national holiday commemorates the unsuccessful 1956 Hungarian Revolution when millions of people demanded what people on our side of the Iron Curtain took for granted: free elections, independent trade unions, free media and in general terms, a government that doesn't treat its citizens like total crap.

It's impossible to overstate how proud Hungarians are of 1956. As they have every right to be. It was an inspiring example of people power, of solidarity, of dignity, of humankind's love of freedom. It did not work out. The hopes and dreams of the Hungarian people and their supporters all over the world were cruelly crushed under the tracks of the Soviet tanks despite spirited resistance. The greatest resistance was from university students and factory workers on the working-class suburban island of Csepel, despite the propaganda from Moscow claiming it was some sort of bourgeois reactionary counter-revolution.

The centre of celebrations was on Kossuth Lajos Square outside Parliament. I caught a trolleybus there in the early afternoon after a morning spent chilling out, recovering from all the walking I did the day before, catching up on my blog and doing laundry. Urban Reverie's Rule Of Travelling No. 1: if there is an opportunity to do laundry, take it! My guesthouse has a washing machine available for guests and damned if I'm going to let that chance slip by.

A Soviet massacre of protestors occurred in Kossuth Lajos Square. There were five vintage 1950s trams parked on the 2 line on the square; inside these trams were historical displays about those who died here. There was a lengthy queue of people waiting to enter Parliament; National Day is the only day when people can enter Parliament for free to view St Stephen's Crown, still the legal symbol of Hungary's sovereignty and state power despite being a republic. Good-natured families waved flags with the centre of the flat cut out in the circle - the symbol of the 1956 revolutionaries was such a flag with the hated communist emblem excised therefrom. Parliament was also flying these cut-out flags. The kiddies got to ride on the back of vintage 1950s trucks of the sort commandeered by the revolutionaries to ferry volunteers to various barricades.

It was all very restrained and cordial, there was none of the boorish, bombastic, drunken xenophobic nationalism that characterises Australia Day. Is there a national holiday in the world as appalling as Australia Day on January 26?

I booked a tour of Parliament for four o'clock in the afternoon and had a couple of hours to spare. Most tourists go on a cruise on the Danube. They pay very large sums of money to do so. But I'm a tightarse. So please allow me to share Urban Reverie's Tightarse Method of cruising on the Danube in Budapest.

BKK, Budapest's public transport authority, operates ferry services up and down the Danube. They are not as frequent as in Sydney or Brisbane, typically they run about only once an hour and finish in the early evening. You won't get a running commentary or dinner and drinks, but the view is just as good. And the fare on weekends and public holidays is only 750 forints. On weekdays, the ferries are no extra cost if you have a BKK travel card like a 24-hour ticket or a weekly ticket. So if you hold off until a weekday, that's even more tightarse-ish!

So for less than the price of a 600 milliltre bottle of Coca-Cola in Australia, I got one of the most fantastic views you can get of a city from a river ferry anywhere in the world. On the left bank was the cathedral-like Parliament, the concert hall, the Budapest Corvinus University. On the right bank was the enormous brooding bulk of Buda Castle, the hopeful and optimistic Liberty statue on the very tip of Gellért Hill, the antique funicular railway shuttling visitors up and down the steep slope to and from the castle. And connecting both banks was a series of bridges, not just mere roadways but intricate works of art in their own right, sculpture as transportation.

I rode on the ferry from Parliament down to a wharf at the west end of the Liberty Bridge and then walked across the same to the east bank. The Liberty Bridge is my favourite, a patina-like green steel cantilever bridge with flourishes and coats-of-arms and all sorts of embellishments.

I caught the 2 tram back up to Parliament, I needed to be back by four o'clock and there wasn't a ferry that would get me back on time. The 2 tram is easily one of the most beautiful tram routes in the world. It runs along the right bank of the Danube the entire length of the inner city.

I joined my tour group of the Parliament shortly before four and after a security check, we were led into the Parliament building. Despite looking like a Gothic cathedral, it was only built in 1904. It might not be antique but that does not take away from its majesty. The Parliament is even more mind-blowing inside than outside. Stained glass windows, gilded vaulted arches, Sistine Chapel-like frescoes on the ceilings, the richest, softest, fluffiest carpet I have walked on. In the middle of the great hall in the centre of the building right under the massive dome is a glass case containing the thousand-year-old St Stephen's Crown. It was even more moving than the crown of which I am a subject and a servant, St Edward's Crown, in the Tower of London. St Stephen's Crown is a burnished gold hemisphere with tassels reverently laid out upon the cushion on which the crown sits, embedded with chunky yet radiant jewels. To protect the crown the lighting is dimmed but the jewels still managed to gleam. On top of a crown is a square cross with round knobs at the end of each arm: the cross is slanted. Legend has it that in the seventeenth century a courtier had trouble closing the lid of the crown's case and he slammed the lid shut, causing the cross to bend. Nobody has bothered to fix it. Indeed, the bent cross is now a national symbol of Hungary and features on the country's coat-of-arms.

The tour guide then led us into the chamber of the National Assembly, Hungary's unicameral parliament. This was also a work of art. Above the speaker's podium are the coat-of-arms of all the imperial possessions of Hungary as of 1904. The tour guide described these countries as Hungary's "partner states". I am certain that the peoples of Croatia, Slavonia, Vojvodina, Transylvania and Slovakia were absolutely thrilled to have been "partner states". Why, as soon as the Central Powers lost the war in 1918, they were all quite reluctant to leave.

Another nice touch - all along the corridors are these long gold trays on the walls at about chest height, with grooves running across the trays. Each groove is numbered. Smoking was and is prohibited in the debating chamber, so Members of Parliament smoked in the corridors. When the bells rang to call MPs into the chamber for a vote, the MPs would leave their cigars in the numbered grooves. The numbers allowed the MPs to remember where they put their cigars. Absolutely genius.

The tour guide said that Hungary's Parliament was the third largest parliament building in the world after Argentina and Romania's parliaments. I questioned that. Parliament House in Canberra was basically built by removing a hill, buulding the parliament, and then putting the hill back on top of it. Canberra's Parliament certainly cannot compete with Budapest's when it comes to awe-inspiring majesty but no way is it smaller.

After the tour finished at five o'clock I decided to go and explore a bit more of Budapest's transpprt system. The M4 metro line in the city's south is the newest line, built in 2014, and the only one that is driverless. Some of the stations are artistically impressive, including one with a hypnotic spiralling mosaic tile pattern along the platform tubes.

From the M4's terminus at Kelenföld I caught a regional train north to Déli (Southern) station, one of Budapest's three main railway termini and the only one that is not an architectural masterpiece. Déli is horrible 1970s communist dreariness, all stained concrete and collapsing ceilings that are covered in tarpaulins and a seedy air of neglect. There were plenty of interesting people around. And by "interesting" I mean drunks, vagrants, the severely mentally ill and other people whose company is not the most pleasant. I high-tailed it out of there and returned to Pest.

Goulash for dinner - goulash in Hungary is actually soup; the stew that Australians call "goulash" is called "pörkölt" here - and a stroll around the Jewish community of Erszébetváros, including a poignant and thought-provoking stop at the ghetto memorial, in the neighbourhood from which so many Hungarian Jews were sent to their deaths in the Nazi extermination camps north of Hungary, brought to an end another stimulating day. Budapest never fails to provide things that engage and interest me. 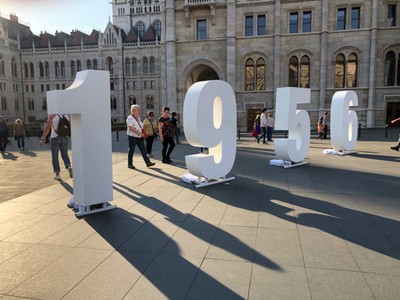 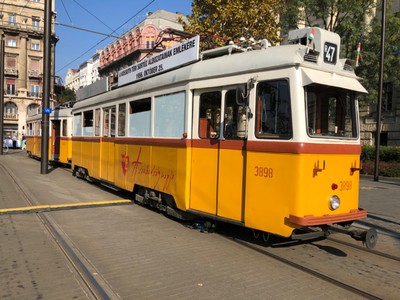 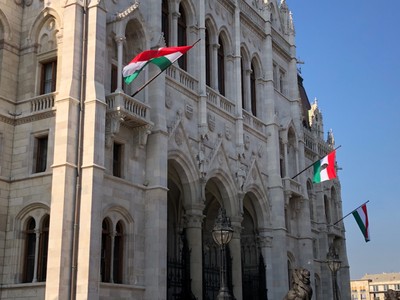 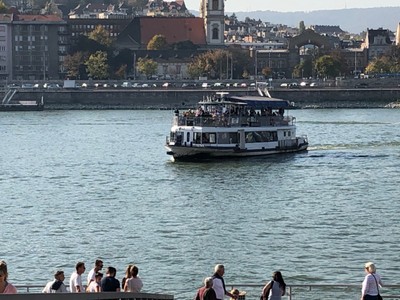 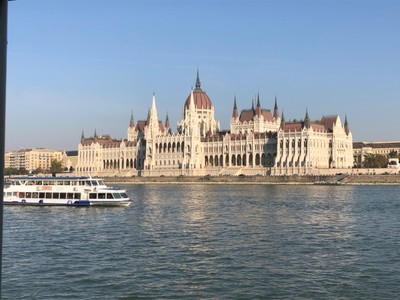 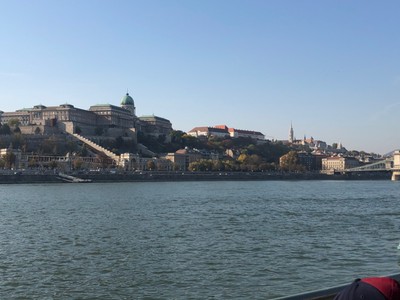 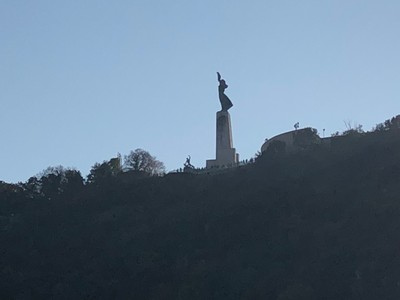 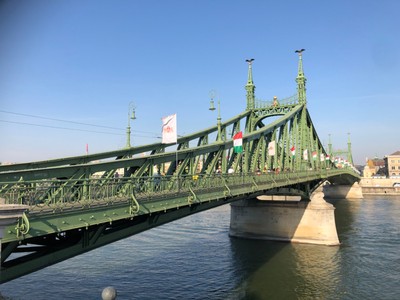 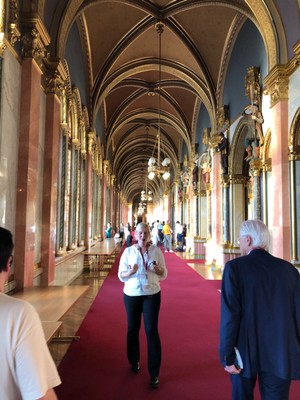 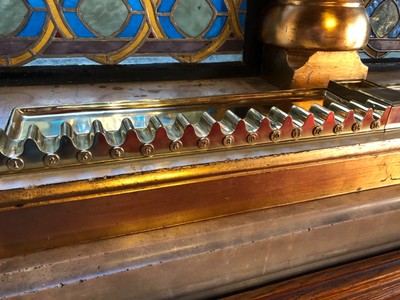 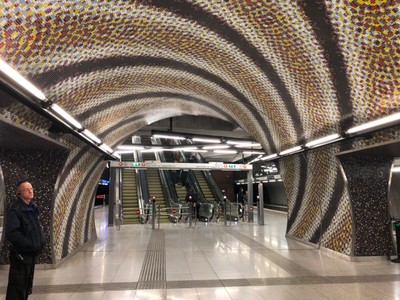 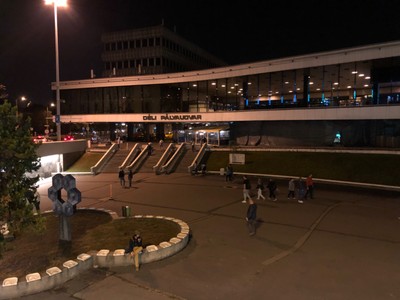 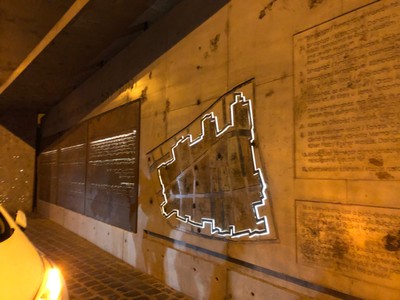 Budapest Ghetto Memorial with a map of the ghetto

Previous Next Table of contents

This blog requires you to be a logged in member of Travellerspoint to place comments.

If you aren't a member of Travellerspoint yet, you can join for free.